"Perhaps they are not stars, but rather openings in heaven where the love of our lost ones pours through and shines down upon us to let us know they are happy" -  proverb

Cathol Sutherland was another of Braerannoch's much loved characters who came to L'Arche after living in the Rudolf Steiner Community in Aberdeen. He was often found marching around Braerannoch playing his home-made bagpipes in his full kilt or dressed as a (very serious) disciple  - this gave the neighbours a scare a few times! 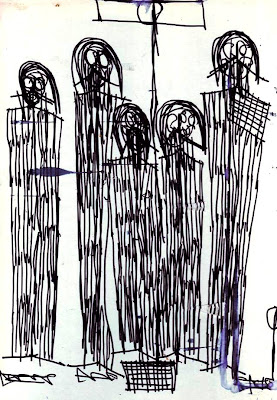 Like James, Cathol also enjoyed showing his artistic side and had his signature drawing - The Disciples. Each year Cathol enjoyed the tradition of celebrating his birthday with a big BBQ in the grounds of Braerannoch which was enjoyed by all. As Cathol passed away shortly before his birthday in 2008, the community felt that by still having his BBQ it would be a great way to celebrate his life and time in L'Arche.


We would like to encourage anyone who knows those core members who have passed to leave a comment with memories and stories of them so that we can share in the joy they have brought to many of our lives throughout the time we were in their lives.