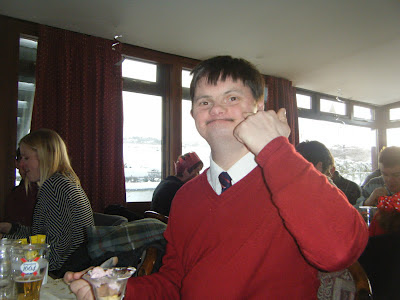 Today (Friday 21st September) is Mark Mitchell's 25th Anniversary.
It is not a coincidence that Mark's anniversary is just a week after Jackie's. Plans for Mark and Jackie to move to Inverness from Edinburgh happened at the same time. The story of why they both chose to come to live in our community is that originally they were both going to be the founding members of L'Arche Edinburgh which had plans to open at that time. However, that was not to be as L'Arche Edinburgh only opened twenty-one years ago. Fate would have it that L'Arche Inverness had two vacancies, so Edinburgh's loss was our community's gain and we were blessed twenty-five years ago with the arrival of both Mark and Jackie.
Mark was welcomed to Braerannoch where he quickly settled and embraced community life with a passion, in all its ways! Mark especially enjoys the community gatherings and prayers as he has a deep spirituality which he is able to freely express in community life. He has always been supported to attend the Inverness Cathedral for Sunday Worship where after twenty-five years he has made many friends.
Mark lived in Braerannoch until he moved to MacTalla, where he and Jackie were the founding members. Over the eleven years living in MacTalla, Mark has welcomed many assistants and new core members. Mark used to attend the Corbett Centre as well as our Workshops. When the Corbett  Centre placement stopped Mark found many other activities to enjoy such as swimming  although he missed the Corbett Centre a lot.
Mark is celebrating his special anniversary tonight at home with those he lives with and a few special friends. He has chosen to have his favourite meal of HAGGIS, NEEPS and TATTIES!!  Yum!﻿
Posted by L'Arche Inverness at 10:24 No comments:

Innes Lee who is a dear friend of The Candle Workshop and who we met through Dickson's of Inverness has done another fantastic round of fundraising.
Innes swam a mile in the terribly cold waters of Loch Ness and raised a fantastic £500 which he has extremely kindly donated to our community.
This money is going towards building a small summer house in the grounds of Braerannoch where core members, service users and assistants can go to relax and chat.
Words can not describe the kindness of Innes and the other Dickson's boys over the past year. Thank you so much Innes! 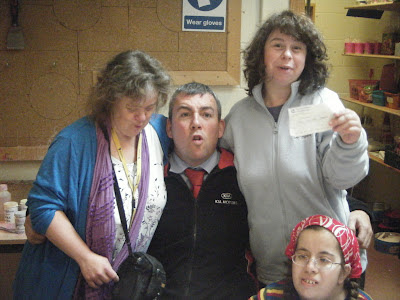 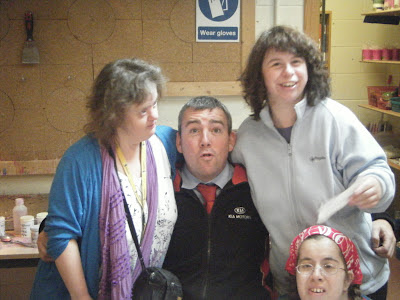 The Workshops had a lovely visit this week from Kenny and Sandra Innes who came all the way over from Houston, Texas and while in Scotland visited us at The Workshop.
Kenny who is orginally from Scotland but is now a Pastor in Texas, got in touch via e-mail after coming across our blog! The couple have been reading about the work of L'Arche and the books of  the L'Arche founder, Jean Vanier and felt that it would be nice to visit our community.
While here, Kirsty took them under her wing and showed them around both The Workshops and Braerannoch where we hope they "got a feel for" what our community is all about. As you can imagine everybody was excited to see new people visiting and Mark (alongside others) was quick to introduce himself to the kind pair!
We are all happy to have both Kenny and Sandra visit and hope that next time they visit Scotland, they will come back to see us again!
HAVE A SAFE JOURNEY HOME...﻿
Posted by L'Arche Inverness at 11:10 2 comments: 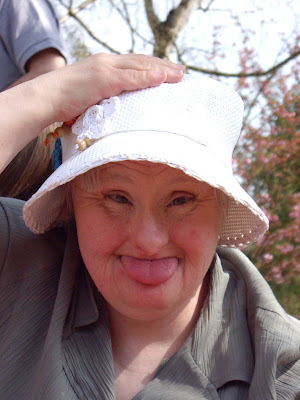 Jackie Dean is celebrating her 25th Anniversary in L'Arche Inverness! MacTalla has organised a quiet meal for her and those she lives with, along with a few special friends.
Jackie arrived in Inverness from Leith in Edinburgh twenty-five years ago and has made Inverness her home ever since. She was one of the founding members of An Cala, where she lived until she moved to MacTalla. Jackie along with Mark were the founding members of MacTalla and over the years have welcomed new core members and assistants.
Jackie has always come to The Workshops and along with Susie and Cait, she set-up The Candle Workshop. Jackie worked there five days per week for many years.
When the new Workshops opened she took advantage of the new "Snug" and enjoyed spending days doing different activities - art work, keep fit and puzzles!
Currently, Jackie comes to The Workshops, four days per week and splits her time between The Snug and The Candles. 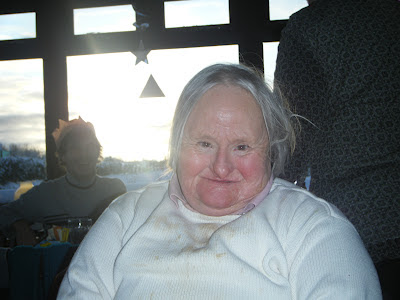 This year Graham Gall will be celebrating his BIG 40th Birthday at MacTalla and has extended the invitation to all members of the community and close friends. 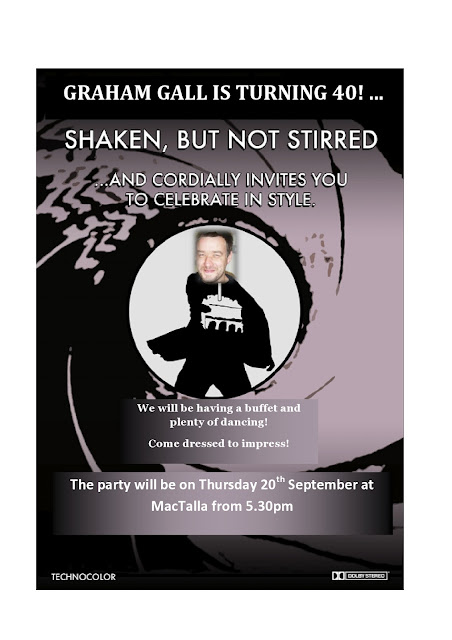 As you can see from Graham's James Bond inspired invitation the party will be held on Thursday 20th September from 5.30pm in MacTalla so come along for a lovely buffet and dancing!!﻿
Posted by L'Arche Inverness at 10:11 2 comments: