After a week of dark rainy days the sun came out just in time for the pilgrimage that Holly and Tracey organised around Inverness. Everyone seemed to enjoy the event which had a good turn out particularly because of the weather!
A big thank you to all those who took part - the total collected was a good £40 and still counting... 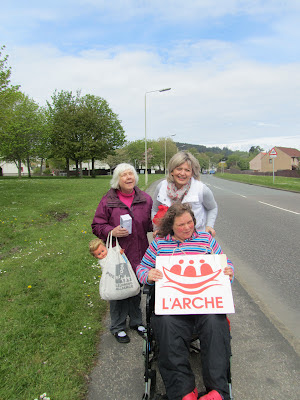 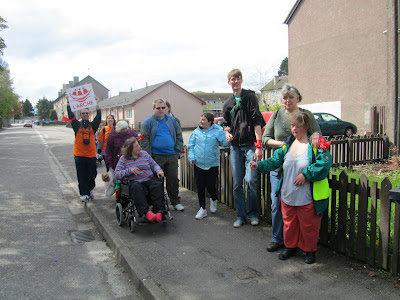 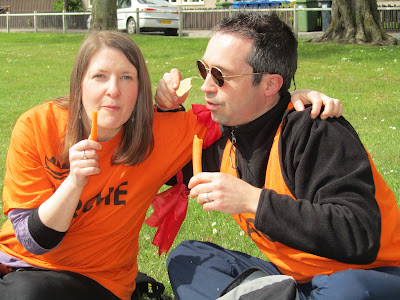 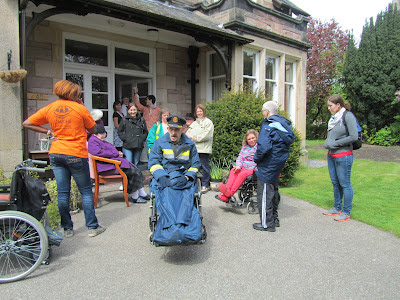 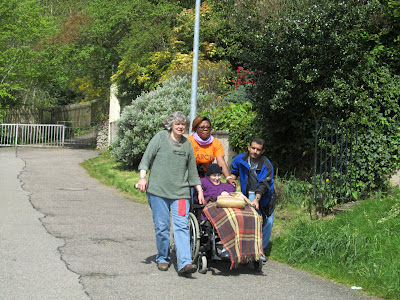 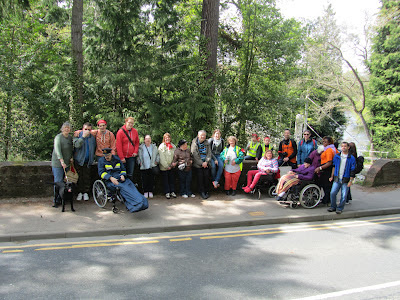 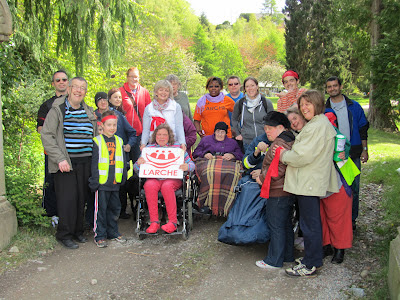 At the end of April Amy organised a fundraising event to coincide with the 5th Anniversary of The Workshops. The event raised £257 in two hours which Amy hugely appreciated.

During the event there was many games organised such a hook the L'Arche boat, Tombola, Stalls, Guess Holly and Tracey's seat on the plane, blow football, pin the tails style games but with Tracey in the plane and Holly to find her suitcase but the biggest seller of all was paying a small fee to throw a wet sponge in the face of a workshop/ office assistant - for obvious reasons I guess! :) 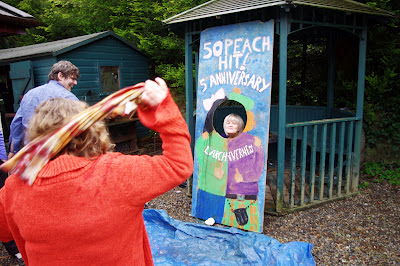 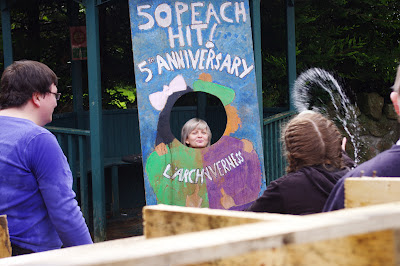 Thomas used his artistic skills to create even more beautiful faces around The Workshops. Most people were reluctant to have their faces painted but from the look of Amy and Thomas I think you can see the reason why ... very scary! 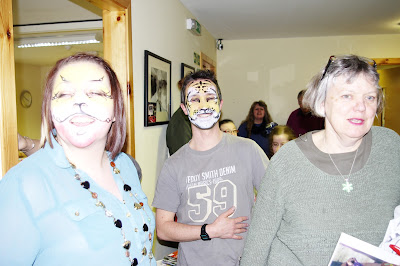 To end the afternoon a huge cake was brought out to enjoy by all and Simon did his quiz which we have wrote about before but what better way to end a day of fundraising but by  - Everyone getting their wages!! 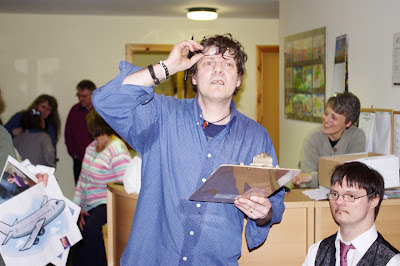 The grand total so far is £1895.00 which is now 61% of our £3000 goal. A big thank you to all community members, Angie, David, Fiona, Patricia and L'Arche Agen for your generous donations.

If anyone would like to make a donation to help towards reaching our goal please log onto: http://www.justgiving.com/atlantapilgrimage or get in touch on 01463 239615.

A HUGE THANK YOU TO ALL! 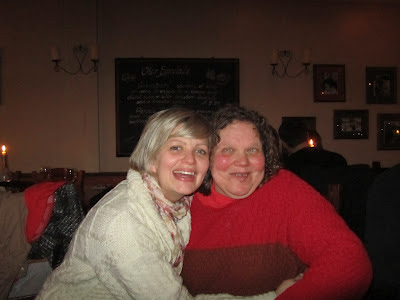 Tracey and Holly are organising a pilgrimage on Sunday 20th May from Saorsa to MacTalla and then finally to Brae where there will be a lunch prepared for all involved in the walk. We hope that many of the assistants from the houses and workshops will participate as well as core members.
The walk is quite long so it is okay for people who want to take part in the walk to join the group either from town (if they are at church in the morning) or from their house when the pilgrimage arrives there. This walk is sponsored so all those who wish to participate must let Amy know by Friday 11th May and they will be provided with a sponsor sheet.

It is realised that some people are not comfortable asking people for sponsors which is okay, however, if you want to take part we would suggest that you would then make a donation personally – no matter how small as every little helps.
The pilgrimage will take place at 11am, starting at Saorsa and finishing at Braerannoch. Everyone participating would be asked to make their own way to Saorsa. Below is a map of the route. 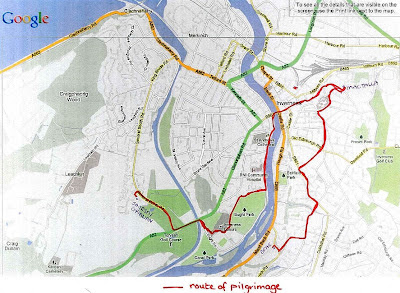 Thank you to all the community for their continuing support of the Atlanta fundraising effort.
Posted by L'Arche Inverness at 16:45 No comments:

On Friday 4th May, Hilary Lacroix led a special prayer in Braerannoch from 12- 2pm where everyone was invited to bring their lunch and take part.

Godly Play is a new more gentle way to learn and worship. It helps people to understand and explore the stories of God and his people, the stories Jesus told and make connections between the stories and our worship. This is done by using handcrafted objects made either from wood or felt which come with each story in order to be a visual representative to those in the community who may struggle with longer spiels. If you would like to look further into the Godly Play model you can log onto: http://www.godlyplay.org.uk/

Everyone who attended seemed to enjoy listening to the story, getting involved by drawing/ painting and spending the time all together over lunch. 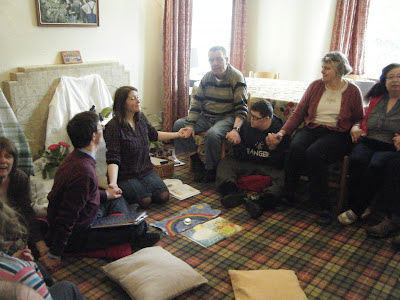 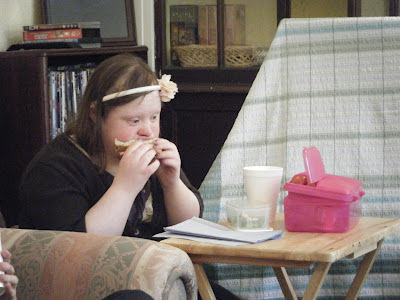 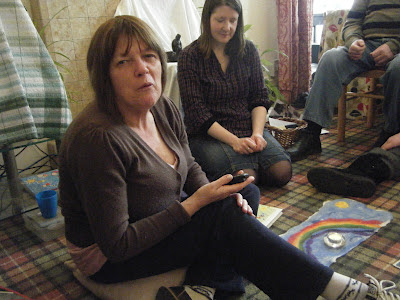 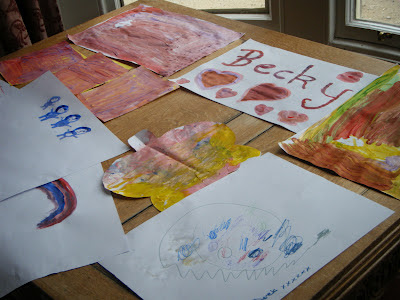 On Monday 21st May, members from both the Inverness and Edinburgh communities will be meeting in Pitlochry for the Scottish region's first Regional Gathering!

The gathering is being organised by Syd, Erika and Miska alongside Elaine, Suzanne, Anthony and many more. As many of you will already know Anthony Kramers was recently discerned as the Regional Co-ordinator for the new Scottish region which is great news for us all.

The gathering will be an all day event at the Atholl Centre where everyone will come together for a welcoming ceremony with music and prayer to get the day off to a flying start. Later in the day we will join for a lovely hot lunch and a chat with all those who attend.

In the afternoon there will be a variety of different workshops available to choose from including a drama session with Suzanne. This will be topped off with a hot pasta supper and then following by the closing ceremony which will be sure to mark the first gathering of the Scottish regional.

If you are interested in attending the gathering please let Erika Jalcakova from MacTalla know so that she can add your name to list by Friday 11th May. 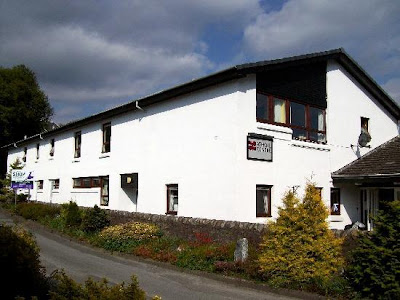 Posted by L'Arche Inverness at 10:34 No comments:

Who would have guessed that the new workshop building had it's grand opening five years ago last Friday?

When speaking to those in the community they can remember the grand opening day like it was only a few months ago. Some were reminiscing about how much planning was involved and how well Cait had organised the day with accuracy; while others spoke about Rebecca cutting the ribbon with David Sutherland CBE in order to officially open it. Nevertheless, all this did indeed happen on 27th April 2007!

During the wages meeting Anne spoke about the old Workshops and Simon entertained everyone with a quiz. As you will expect (particularly if you know Simon Meddle) the quiz was bursting with funny stories and answers which entertained all. One of the more mild questions to give you an idea of the quiz was: Q. What does Hector do in his office? A. a) nothing b)sleep c)eat d) money things. As you can guess it was of course d) money things but it made everyone laugh.

There was a huge chocolate cake prepared by Amy and Michael which was covered in icing with a big number 5 on top! This was the second attempt at the cake after the first try ended up half in the baking tray, quarter on the floor and quarter on the serving plate where it was meant to go!!

BUT of course everyone enjoyed tucking in to the unhealthy treat :) 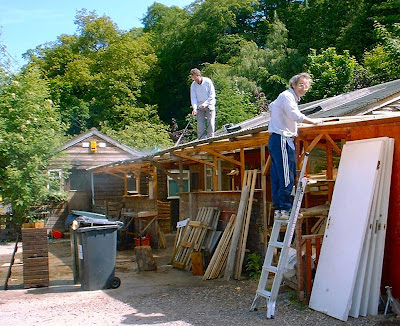 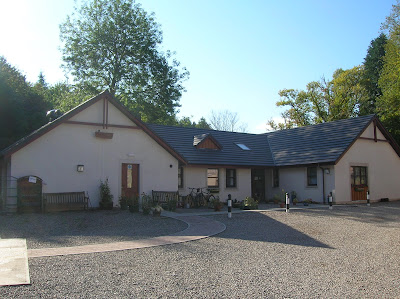 Posted by L'Arche Inverness at 15:03 No comments: