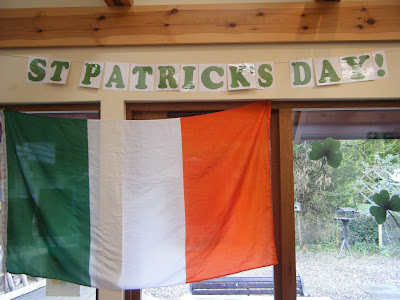 The Workshops organised a casual St Patrick's Day Party on the afternoon of Friday 16th March which went down fantastically with everyone! The hallways were decorated with dozens of green shamrocks, banners, pots of gold, rainbows and of course not forgetting a huge Irish Flag! 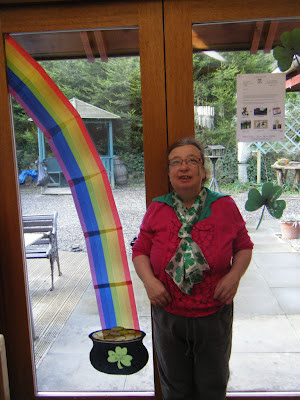 There was a letter put out for everyone (who wished) to come dressed in as much green as possible! This was really taken on board and it was amazing to see how much effort everyone managed to put in. Amy had face paints so managed to go round a lot of people to paint Irish flags and shamrocks on their faces and even had a request from Martin to paint rabbit teeth on his chin ... which was of course done with a lot of laughs! 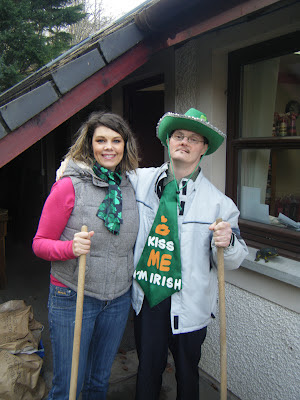 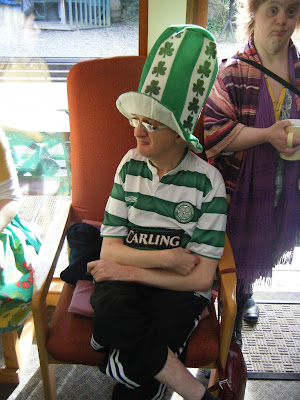 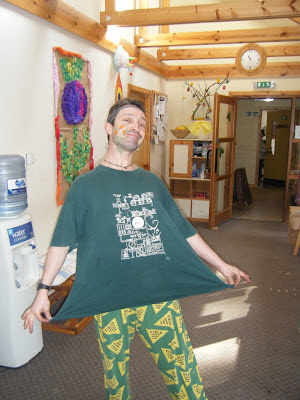 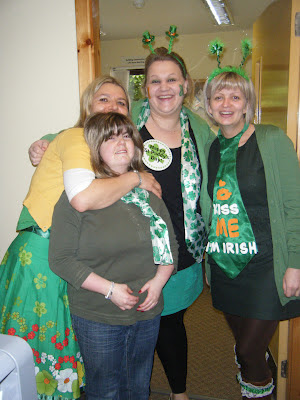 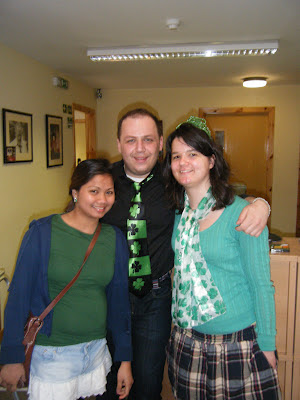 Throughout the afternoon there was a lot of Irish and Scottish dancing, conga lines, party games and plenty of food and drink to enjoy. It came as a huge surprise when lots of small cakes and a "massive" cream ring appeared fresh from Harry Gow's at the Reception Desk. This was a very, very kind gesture from Ross Jackson and his Mum, Linda - Thank you both! You can only imagine the excitement that it caused - nobody seemede to care about their "wages" once the cakes were unveiled just before home time. 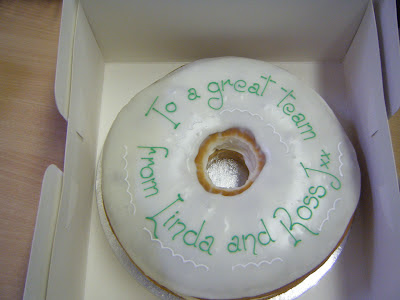 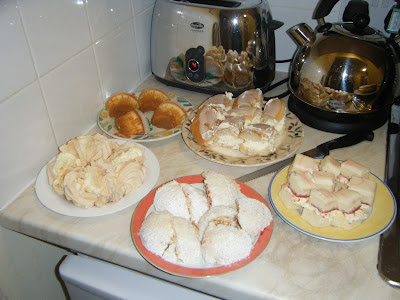 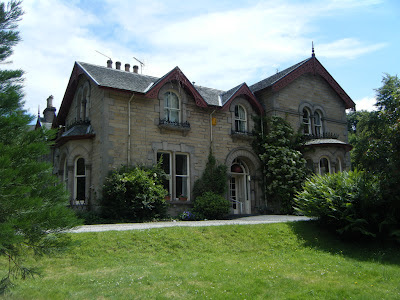 On Sunday 11th March, Braerannoch had a party to celebrate the house's thirty-seventh Anniversary and all those who have lived in Braerannoch were invited.
As Braerannoch was the community's founding house in 1975 as gifted to L'Arche amazingly by Elizabeth Buckley, it meant that a few core members who currently live in Grianan and MacTalla such as Lilias, Fiona and Mark Mitchell have all lived in Braerannoch before their current houses opened.

Everyone gathered together to enjoy a tasty meal of Macaroni Cheese perfectly prepared by Elissa one of the newer Canadian Assistants as well as the most high calorie chocolate cakes baked by Michael who is notorious in Braerannoch for his cake baking skills!

The team had also put together a fantastic powerpoint slideshow which included pictures from when Braerannoch opened as the first L'Arche house up until the latest German Assistant, Luise, arrived. Below you can see a picture of Elizabeth Buckley and Ian Cameron one of our first core members who has now sadly passed away. 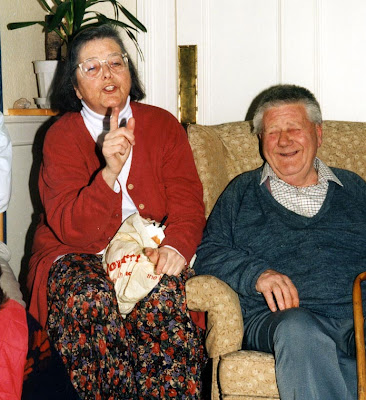 After the slideshow everyone joined in to share their favourite stories about Braerannoch and the core members past and present. This turned out to be very emotional with a lot of laughs and also some tears especially from Susie Stewart as she shared her memories of James and Cathol.(Pictured below). 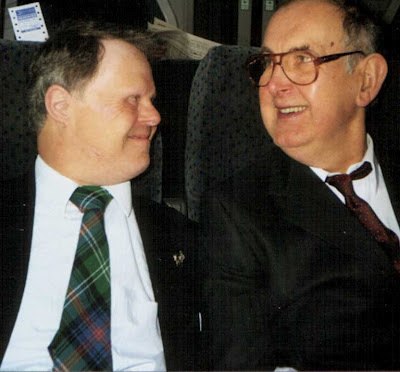 On Wednesday 7th March, MacTalla had a very important and wonderful occasion to mark!
Hayley Bell, who is the newest core member to our community, remarkably reached her first anniversary with us already ... the time has passed so fast!

Hayley has been a wonderful addition not only to the MacTalla Team but also to The Community as a whole. This lovely young lady has brought so many different and exciting gifts for us to enjoy which really has made it a pleasure to have her in The Community.
MacTalla marked the occasion by celebrating in style and inviting some of her friends from the other houses for a tasty meal. This obviously went down well with everyone and was a lovely way to celebrate. 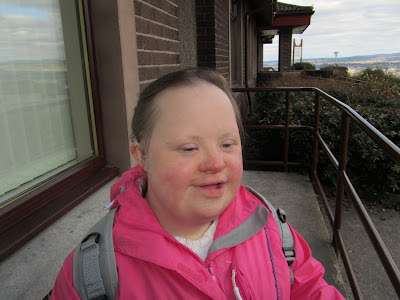 And heres to many, many more enjoyful years!
Posted by L'Arche Inverness at 10:47 No comments:

A Bedroom Makeover for Derrick ... 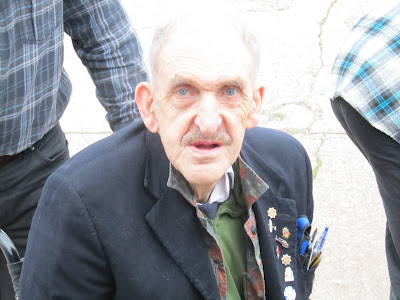 Last week saw the Braerannoch Team and a whole host of professionals such as plumbers and joiners get their hands dirty to make lots of changes to Derrick's bedroom. The old bathroom had its walls torn down and the bathroom suite disconnected to make the room much, much bigger.
Not only this but Derrick now has access to the two big beautiful windows which has made the room look so much bigger, brighter and fresher as the sun shines through.
Once the professionals had done thier work the Brae Team and Holly made sure that the room was cleaned from corner to corner and that it was decorated beautifully with his belongings and T.V sitting in pride of place. 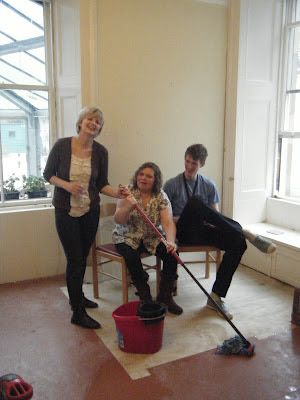 As you can see from the above picture, everyone got involved to make Derrick's room special. Since then able care has been in to lay a lovely new floor which has really finished the room of well.
Once all the alterations were set in place, everyone anxiously awaited Derrick's verdict ...
As Derrick was pushed into his new room the tension was building, but this was unneccessary as he was absolutely delighted and was amazed looking all around at the trasformation. Once the intial shock passed he greeted everyone with ...
"Where's my Hat?"  and a big Derrick Laugh!
Posted by L'Arche Inverness at 10:40 No comments:

Our good friends, Dickson's of Inverness, have manged to give us a fantastic deal on a new SEVEN seat vehicle for the community's use. This mean't saying a big 'Goodbye' to our old and loved "Big Blue Bus" which was traded in as a part exchange for our new vehicle. ﻿
The new car has been lovingly named by those in The Snug as 'Percy' which all of us have taken on board too! This has been an exciting boost to the community after such hard times and now that the vehicle is smaller it means that many, many more assistants have got the confidence to drive! - This can only mean one thing . . .  MORE TRIPS OUT FOR ALL! 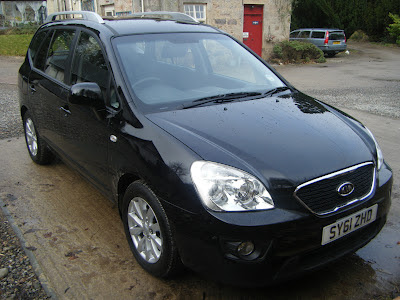 Posted by L'Arche Inverness at 11:05 No comments: